COVID-19: Byers is committed to protecting your health and safety with a Virtual Consultation. - Essential Workers Information. X

Byers Solar understands that looking at solar estimates can be confusing. It is sometimes challenging to understand terms and be sure that solar system components and installers are offering an apples-to-apples comparative price.

If you want to learn more about solar energy, Byers Solar wants to help. Knowing that Byers Solar is on your side and will guarantee its work, products, and treat your home as if it our own is the policy Byers stands by.

Array current — The electrical current produced by a photovoltaic array when it is exposed to sunlight.

Array operating voltage — The voltage produced by a photovoltaic array when exposed to sunlight and connected to a load.

Baseload — The average amount of electric power that a utility must supply in any period.

Conductor — The material through which electricity is transmitted, such as an electrical wire, or transmission or distribution line.

Days of storage — The number of consecutive days the stand-alone system will meet a defined load without solar energy input. This term is related to system availability.

Direct current (DC) — A type of electricity transmission and distribution by which electricity flows in one direction through the conductor, usually relatively low voltage and high current. To be used for typical 120 volt or 220-volt household appliances, DC must be converted to alternating current, its opposite.

Energy audit — A survey that shows how much energy is used in a home, which helps find ways to use less energy.

Input voltage — This is determined by the total power required by the alternating current loads and the voltage of any direct current loads. Generally, the larger the load, the higher the inverter input voltage. This keeps the current at levels where switches and other components are readily available.

Inverter — A device that converts direct current electricity to alternating current either for stand-alone systems or to supply power to an electricity grid.

Kilowatt (kW) — A standard unit of electrical power equal to 1000 watts, or to the energy consumption at a rate of 1000 joules per second.

Life-cycle cost — The estimated cost of owning and operating a photovoltaic system for the period of its useful life.

Load — The demand on an energy-producing system; the energy consumption or requirement of a piece or group of equipment. Usually expressed in terms of amperes or watts in reference to electricity.

Photovoltaic (PV) panel — often used interchangeably with PV module (especially in one-module systems), but more accurately used to refer to a physically connected collection of modules (i.e., a laminate string of modules used to achieve a required voltage and current).

Photovoltaic (PV) array — An interconnected system of PV modules that function as a single electricity-producing unit. The modules are assembled as a discrete structure, with common support or mounting. In smaller systems, an array can consist of a single module.

Photovoltaic (PV) system — A complete set of components for converting sunlight into electricity by the photovoltaic process, including the array and balance of system components.

Plug-and-play PV system — Off-the-shelf photovoltaic system that is fully inclusive with little need for individual customization. The system can be installed without special training and using few tools. The homeowner plugs the system into a PV-ready circuit and an automatic PV discovery process initiates communication between the system and the utility. The system and grid are automatically configured for optimal operation.

Volt (V) — A unit of electrical force equal to that amount of electromotive force that will cause a steady current of one ampere to flow through a resistance of one ohm.

Voltage — The amount of electromotive force, measured in volts, that exists between two points.

Voltage protection — Many inverters have sensing circuits that will disconnect the unit from the battery if input voltage limits are exceeded.

Watt — The rate of energy transfer equivalent to one ampere under an electrical pressure of one volt. One watt equals 1/746 horsepower or one joule per second. It is the product of voltage and current (amperage). 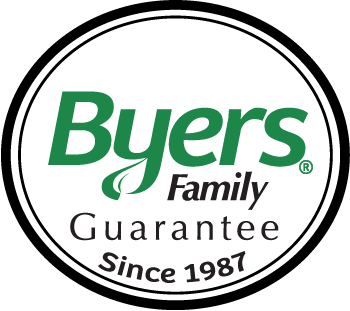 Every day we aim to deliver exactly what our clients want from our line of products and services. According to GuildQuality, an online independent review service, our “five-star” rating tells us that we are doing it right.

Why would I want to go solar? Is there an advantage to me going solar in lieu of staying with what i currently have status quo?

Byers Enterprises, Inc.
I am very happy with Byers. Everyone that I have talked to and dealt with have been excellent in politeness, professionalism, and knowing their jobs.
Anthony R. Roseville

Byers Enterprises, Inc.
Great people to work with, great customer service. I love my solar tubes. They will be back out next Monday to install leaf guard gutters.
Nancy P. Placerville

Byers Enterprises, Inc.
Normally I don't take the time to give feedback about a job unless there is a problem. Your company is the exception. Thank the entire Solar team!
Paul E.

Byers Enterprises, Inc.
The installers were very professional and the job was done quickly and their clean up was outstanding.
Larry S. Sacramento

Byers Enterprises, Inc.
They were on time, did a great job, and worked around our scheduling.
Diane B. Murphys