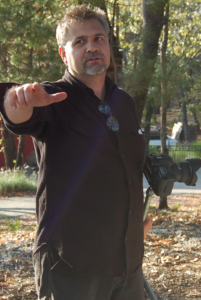 Gerald Davenport delivers quality video for Byers Enterprises. Gerald Davenport responded to a classified ad for a warehouse job at Byers opening in November 2014. With most of his skills in computer programming and video editing, he was informed his qualifications did not match the position requirements. However, along the way, his resume came to the attention of Ray Byers Jr., whom at the time was watching Byers appetite for video and website development grow at an astounding pace. Gerald got a call from Byers asking if he did video as a hobby. Gerald responded with a no: he was a professional videographer and filmmaker.  So began Gerald Davenport’s role growing Byers multimedia library and web presence.

Gerald has worked closely with Ray Byers Jr. changing the way Byers communicates with its clients — initially working to create a more comprehensive and unified website, with the ability to implement rapid changes and add features to enhance the client experience. But Gerald’s true creativity really shines with video. Gerald manages both Vimeo and YouTube channels for Byers Enterprises.

Gerald was just a young boy when Star Wars came out, but the creativity it sparked in him still remains fresh. Gerald was soon staging small dramas and finding ways to film as a seven-year-old. He saved allowance money for film and then set aside time to borrow his grandparent’s projector to see his latest project — ambitious to say the least.

His father’s work required him to be in larger cities and to move to new territory,  as he brought the products his company was manufacturing to new markets, always expanding. Gerald and his 3 siblings found themselves moving frequently while growing up. When his parents divorced, his Mother relocated with the family to Norwalk in Southern California. Gerald at 14 visited his aunt and uncle in Grass Valley. He never left.

“I was just not a big city person, and as soon I came to Nevada County, I felt at home.”

Gerald graduated from Nevada Union and married his high school sweetheart, Tamara. They have two grown children, Aria and Kyriè. A decade-long path of work in the grocery industry and an entertainment business that provided onsite events gradually led Gerald back to school and his first evocation — film and computing. Gerald earned his BS in Computer Science at CSU Chico and turning down a job offer at Apple, continued his education at Video Symphony, an editing trade school in Burbank. “This was a great experience because often you would be in an editing workshop with professionals. They would see your work and offer you editing jobs”, notes Gerald.

Gerald has directed and produced several films, including THE GOLdEN TREE and Petite Chardonnay, as well as the NCTV shorts “The National Exchange” and “Oberon’s Gold” both by Bruce Bradley. All of his films have screened at the Del Oro and also at the Crest Theater in Sacramento. Learn more about Gerald’s projects at Aria Pictures. Learn more about Gerald at GeraldDavenport.com.

Gerald stays very busy with video production at Byers Enterprises but still likes to keep his creative life blazing outside his work hours with a wide range of projects which include Davenport Website Designs, Aria Pictures, and DVD Memories.

As for Byers, Gerald sees video work becoming increasingly in-house and controlling the content, visuals, and direction, with the support of additional team members.

“It is wonderful to have Penny taking photos and on social media. We are gaining so much depth and are able to respond quickly as opportunities come up, like Facebook live sessions, which we can do pretty much on the spur of the moment. I really have to say Ray Jr. has been very wise in collecting resources to represent Byers in a highly professional manner.”

Asked about his favorite part of working a Byers, Gerald states,

“I am proud to be part of a group of caring people that are looking to deliver the highest quality products that others can rely on as pinnacle products, offering great value. It is rewarding to be part of a team that cares about our clients and genuinely wants to really serve. I believe in a culture of service, either do it right or do not do it all and Byers does it right. I feel honored to be part of this family.”